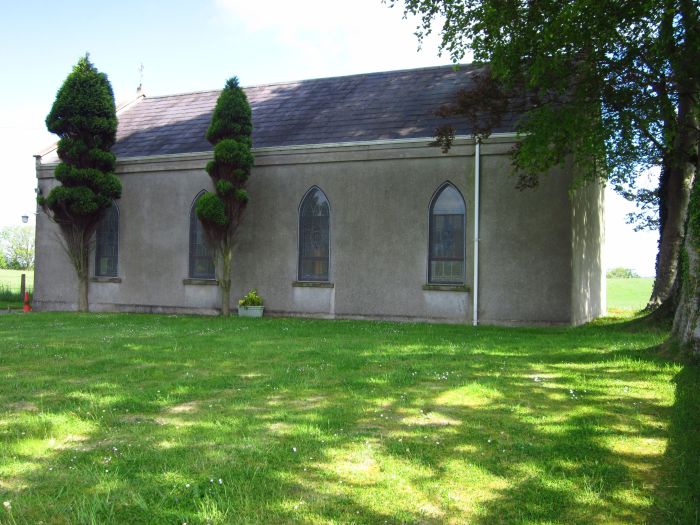 According to the Ordnance Survey memoirs of 1838 for the Civil Parish of Ballinderry, the land on which Ballinderry Chapel stands was first given for the building of a local Church by a local farmer, but later it was given as a free gift from the Marquis of Hertford.  The site was said to be that of a Mass station where Mass was said in times of persecution and is on the border of the Diocese of Down and Connor with the Diocese of Dromore; the dividing line is the Chapel Road itself at that part.  The first church built on the site in 1779 was a thatched building which was burned during the rebellion of 1798.  Between that date and the re-building of the Church in 1814 Mass was celebrated amongst the ruins.  The Ordnance Survey memoirs (1838) state that this building was oblong, one storey high and slated.  It measured 38.5 ft x 18.5 ft inside and the walls of stone and lime were almost 2ft thick.  The floor was of sand, lime and clay and the church was lit by 4 arch windows.  The door was in one gable, while the altar, composed of timber and stonework, stood against the other gable.  Behind the altar was a small vestry lit by a small window, and there were no seats or galleries in the Church.  The cost of building the church was met chiefly by the congregation.  Mass was celebrated at 10 a.m. each Sunday and the average attendance was between 200-400.  Proceeds of collections were used to keep the Church in repair and relieve distressed poor.  The memoirs state that the Rev. James Denvir was the pastor of the Ballinderry congregation.  Whether Fr. Denvir lived at Ballinderry or at Aghagallon is not stated for there is no mention of the lodge at that time.  The Rev. James O’Laverty’s history of Down and Connor states however that the church built in 1814 was replaced in 1845 by Fr. Sam Young.  The Church was dedicated to Our Blessed Lady on 9th October 1853 according to Parish records.

Prior to being renovated in early 1960’s the Church had a main altar and 2 side altars; the floor was concrete slabs and there was a middle aisle with seats on both sides.  The men sat on the window side of the church and the women on the other.  The confessional and the Baptismal Font were at the back on the left as one entered the church and on the right was a ‘singing box’ as it was called by the local parishioners.  Outside there were stables at the back of the church.

When the church was closed for renovation in the 1960’s, the old vestry was removed and a new block housing the sacristy, the confessional, an entrance porch and toilets, was built on the site of the stables.  The three altars were replaced by one main altar and the seating placed in the centre of the Church with 2 side aisles.  The Stations of the Cross are along one side of the Church and were painted by Professor Joseph McWilliams.  The Church was re-opened on 8th December 1963.

Guided by the example of Jesus,
through prayer and reflection,
we will continue to build a welcoming,
vibrant and inclusive parish family
where everyone is valued, supported and encouraged to be
involved in parish and community life.